The idea to fit the sword to the uniform of an Estonian officer dates back to 1923, when the Supply Government of the Defence Forces adopted a policy to allow swords to be worn with the uniform. The swords were ordered from the Aichorn factories in Solingen, Germany, and the first batch arrived in Estonia in 1925. At that time, different types of swords were used in Estonia - battle swords used by cavalry and artillery, and ceremonial swords by infantry and navy. By 1935, the latter two were actively in use. The sword of the Estonian Defence Forces was an element of an officers' uniform worn at ceremonies and parades. 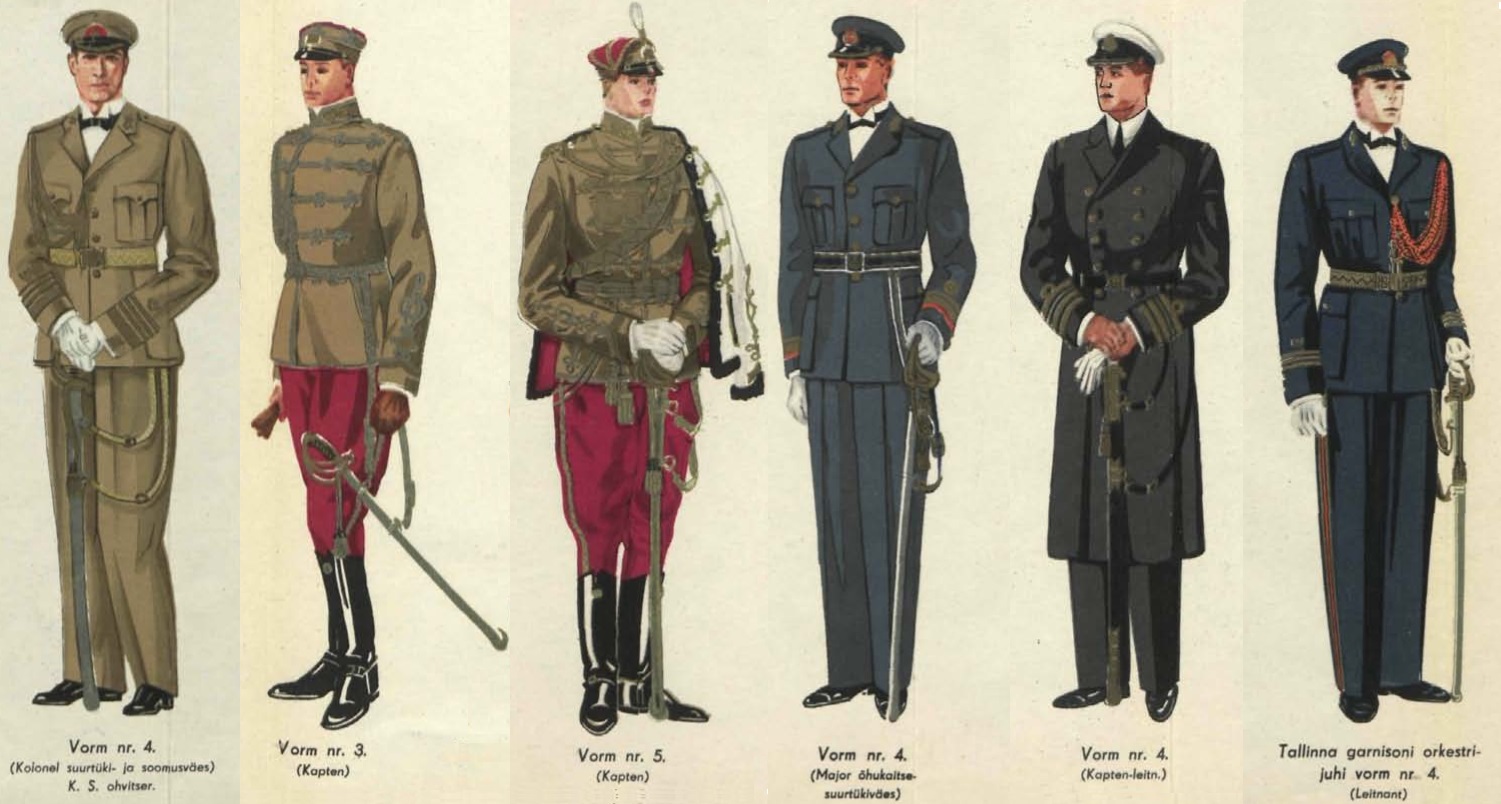 Illustrations: Description of the uniform of the Defense Forces and regulations on the wearing of uniforms 1939

Story of the swords

Upon the restoration of independence of the Republic of Estonia, the Estonian Reserve Officers' Association decided that the tradition of ceremonial swords must be restored in order to tell the story of the military leaders of Estonia beyond the remaining chapter.

From the original swords used in 1925, few have survived to this day. In 1940 swords at the hands of Estonian troops were handed over to the Red Army and the new power.
In 1941 the civilian population was also ordered to surrender their cold weapons (daggers, swords, bayonets).

In order to restore the tradition of ceremonial use of swords in Estonian Defence Forces, the original surviving sword, photographs and documents from collectors, museums and archives were used in the restoration process. 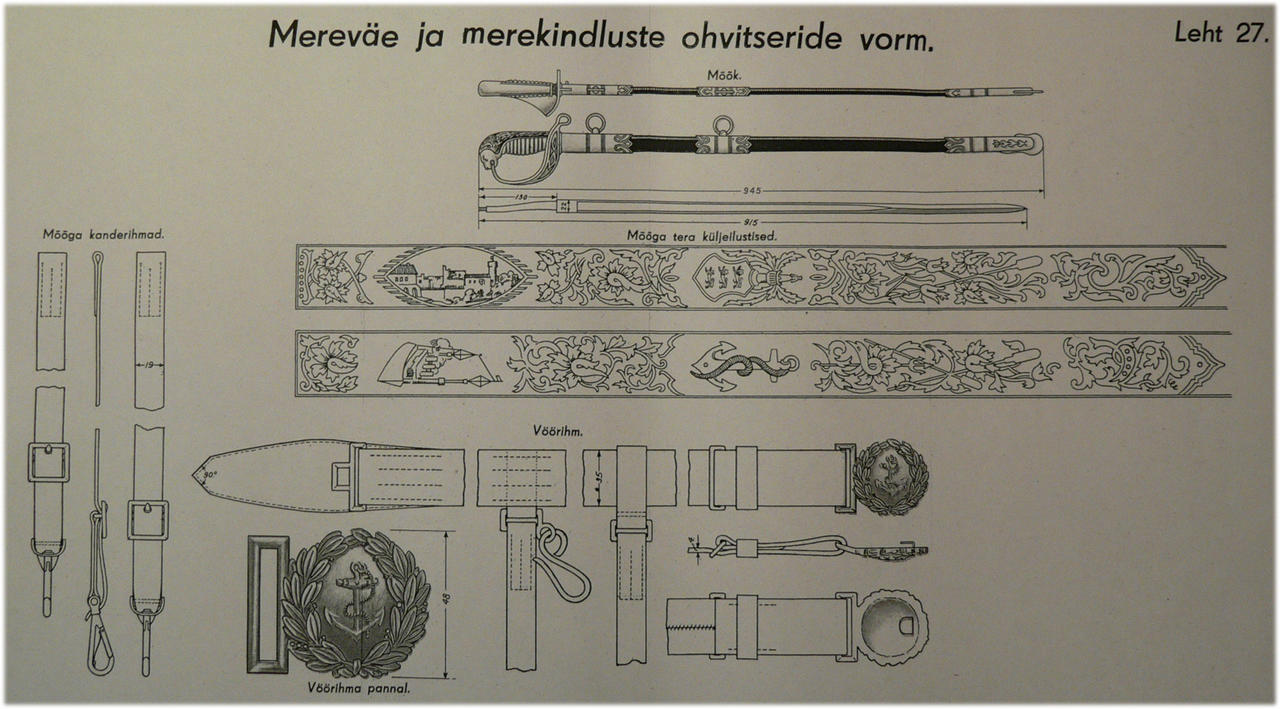 Illustrations: Description of the uniform of the Defense Forces and regulations on the wearing of uniforms 1939

In 2006, a new ceremonial sword for the Defence Forces Army officer was presented to the public at the Laidoner Museum in Viimsi. The presented sword is a copy of the original sword used in the Estonian Defence Forces before World War II, with some small concessions. More modern materials have been used instead of some earlier wooden parts. The silhouette of Toompea on the blade of the sword has also been slightly changed compared to the original sword used in the 1925.
By 2009, following the example of the Army Officer Sword, the sword of a naval officer had been restored and then Commander of the Defence Forces, Lieutenant General Ants Laaneots, handed over the first Navy Officer Swords at the Maritime Museum. The Navy Officer Sword was restored exactly according to the original sword used in the Estonian Navy before World War II and in the same factory where the Army Officer Sword had previously been restored. The Estonian Navy and the Defence League Naval Division also participated in the restoration of the sword.
By 2012, the restoration of the Air Force Officer Dagger had also been completed, the restoration was led by the Air Force Command. Before World War II, no daggers were actually completed thus, the design of the dagger was based on the sketch of the blades one side, daggers handle and scabbard published in the 1939 "Description of the uniform of the Defense Forces". Arno Mäger was asked to design the other side of the blade and at the request of the Air Force Command, an image of the air force symbol the North Eagle and the Sopwith 1½ Strutter aircraft captured in 1919 during the War of Independence was placed there.


Making and ordering the swords

All swords and the dagger are hand forged in Germani, in Weyersberg, Kirschbaum & Cie (W.K.C.) factory in  Solingens and the order from Estonia was taken there as a
a historic tribute since the pre-war era Estonian officers swords were also ordered there. Blades are forged of high quality steel, hardened, and nickel plated. Traditional "Damaszieren" technique is used to hand-detail and acid etch the blades .

In addition, Non-commissioned Officer Sword has been developed and first patch arrived 2019 to Estonia. Work on the Defense Forces Academy cadet sword is still in prorges.
Traditions

In 2010, the Commander of the Defence Forces, lieutenant general Ants Laaneots, handed over the Army Officers Sword donated by the Reserve Officers' Association to the best graduate, second lieutenant Ragnar - Aleksander Jõgus, who graduated with honors from the military school. From that day Defense Forces Academy has adopted the tradition to present to the best graduates from the army, navy and air force course their military branches sword. 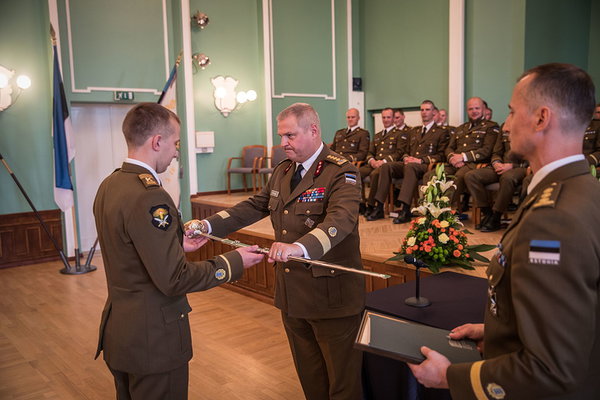 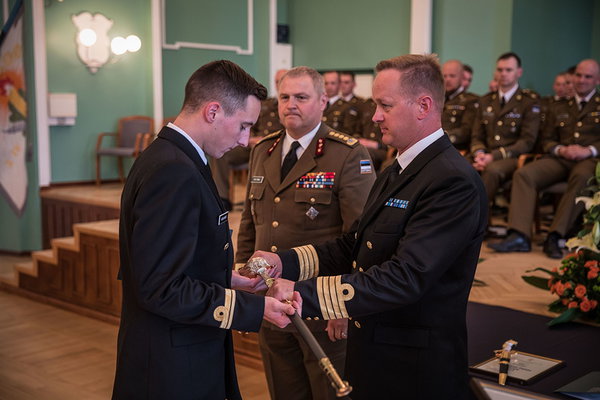 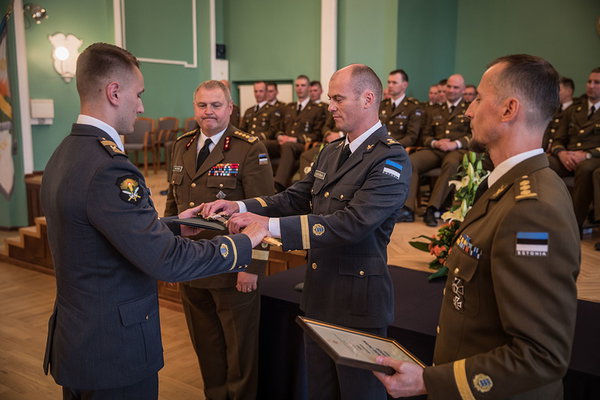 In 2006, the Estonian Reserve Officers' Association donated Army Officer Sword No. 0001 to the President of the Republic of Estonia and it is held in Kadriorg Presidential Palace. Since 2017 it has become a tradition for the president to hand over the sword to the Independence Day parade Estonian flag committee which always consists of reserve officers. After the parade, the sword must be returned to the president. 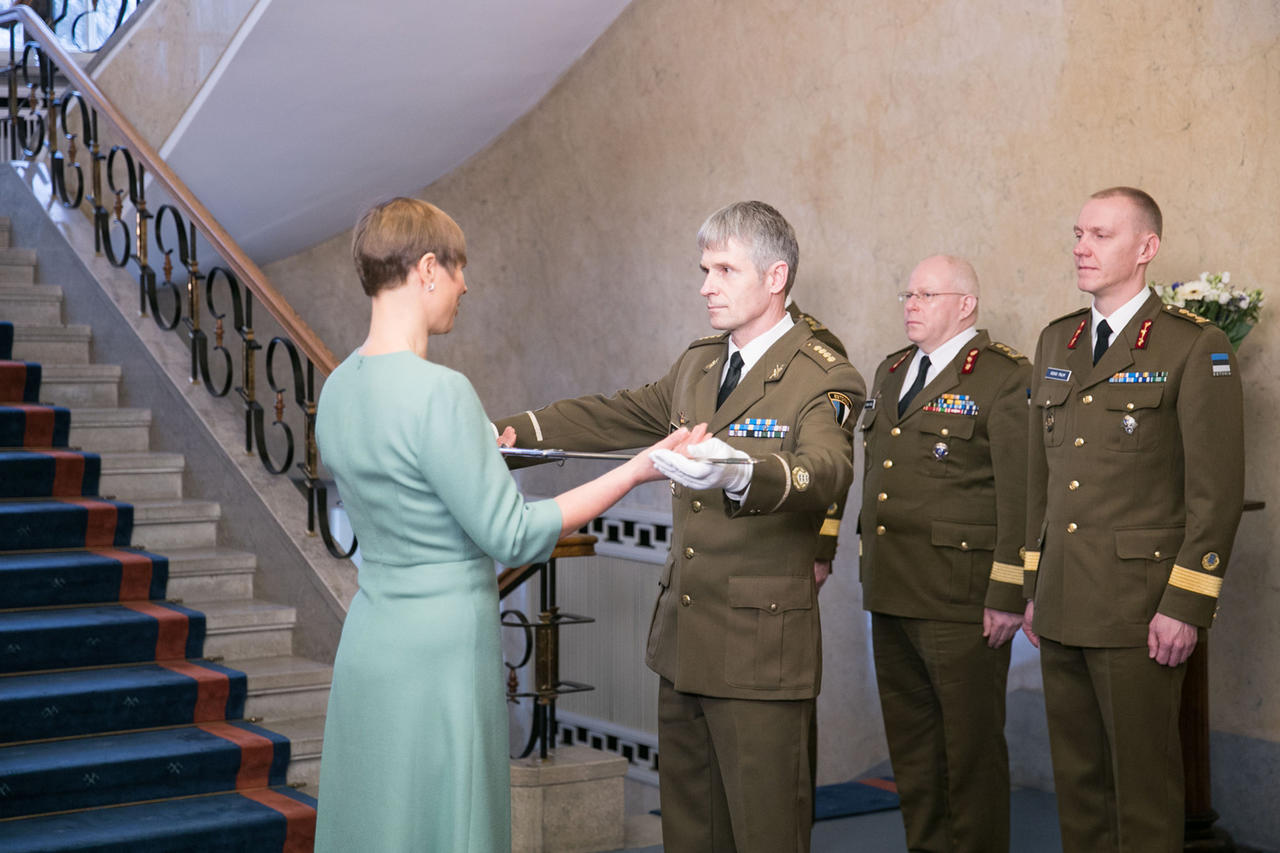 Sword No. 0000 of each military branch is a reference sword, which remains at the disposal of the Estonian Reserve Officers' Association and is an example in the production of subsequent swords.
Army Officers Swords No. 0001 – 0009 are
institutional swords, which have been donated in order to - the President of the Republic of Estonia, the Commander of the Defense Forces, the Commander of the Defense League, the Military School and the Estonian War Museum.

Air Force Dagger No. 0001 is institutional and belongs to the Commander of the Air Force.

Army Officer Sword beginning from
No. 0010, Navy Officer Sword from No. 0005 and Air Force Officer Dagger from No. 0002 can be ordered by Estonian officers for their personal use, whereas the Army Officer Sword No. 0010 was given as a gift by the Estonian Reserve Officers' Association to the Knight's Cross cavalier Harald Nugiseks, on his 85th anniversary.
Swords starting from No. K10001 are collection swords which is shown by the letter K that has been added to the six-digit number. They can be ordered by collectors and person who does not have Estonian officer rank.